Last chance: This gratin would pass the family test – or not; and might have ended my love affair with cured fish.

Cured cod has many names all around the world – you may know it as Bacalhau (which is the most famous Portuguese variety), as Stockfish maybe (very common), as Klippfisch (as some Germans say). But the French have it, as always, totally different: they say Morue. It’s cod. Dried and salted. Or just salted. Back in my childhood, my mother served it on Holy Fridays as if it was a sacred dish.

It hasn’t really been a staple in France, the beautiful land of two oceans, where fresh sea fish has always been at hand (at 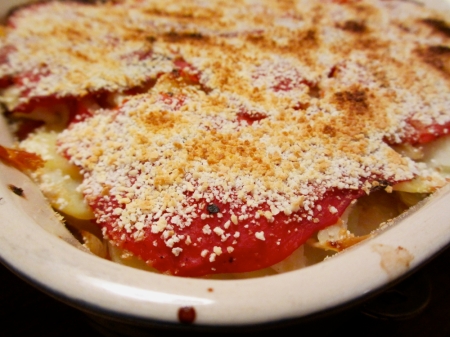 Fish, potatoes, peppers, onions, bread crumbs – can it work out?

least since the railways linked the cities to the coastlines). But there’s a significant Portuguese population in France nowadays and they kept that somewhat weird fish product alive. I mean: Why would you eat fish nowadays the way the old explorers did out of their sheer necessity to store food for year-long sailing trips (without refrigerators)?

Well, my answer is: Because it is still an interesting, even fascinating affair. It not only links you to, say, Vasco da Gama & Co., it leads you back to a century-old poor people’s kitchen while it also represents quite a cooking challenge. The fish – hard and dry as it is – has to be de-salted and softened for days. After that, you can’t just cook it; there’s always a good chance to ruin its texture. You have to master temperatures and liquids (like the classic, laborious French fish stock fumet) and you’ll surely get your hands dirty when finally pulling apart the fish which, again, will only be another step in the long course of preparing a meal.

Still. Whenever I saw the grayish, uninviting chunks of dry fish at a market I couldn’t help thinking of what to do with them. I admit that, so far, I have always failed to turn them into a significant or at least pleasant dish. Last night, I tried it again. It was a moment of decision-making.

I would either create something alright – or never touch a Morue again. I

combined it with potatoes (pre-cooked in the fish broth), aristocratic pimientos del picillo, white onions fried in excellent olive oil. I added black pepper, I sprinkled generously with breadcrumbs – and put the dish in the oven for 30 minutes.

My family played the jury and I felt like a candidate of The Voice. First, they didn’t say much but ate with good appetite. Then, my wife said: “Not bad, actually”, which wasn’t bad at all. My sons just finished their plates and wanted more. And more. And after a couple of minutes the whole dish was empty and my Gratin de Morue was gone. It passed the test. I’ll do it again. Cooking means taking risks. 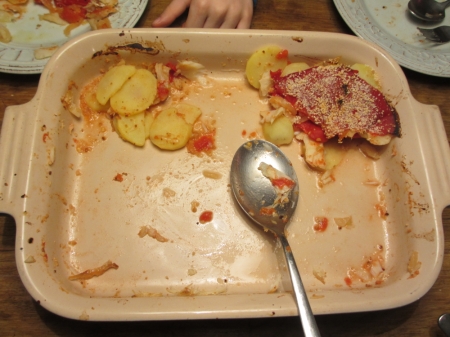 On the finish line: my younger son took this last spoon full, too. I’ll do it again.