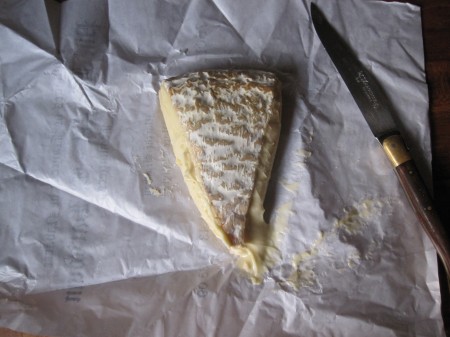 The Brie family is a very noble one, it was first mentioned in 774 by Éginhard, a writing monk who had one of the cheese’s ancestors on his table at the abbey of Reuil-en-Brie. Over time, it became a real favourite of kings and queens, it is well documented that the grand Henri IV was an admirer as well as the last French king (before the revolution) Louis XVI. His fame rested intact in the following centuries, it was served to the Great Power leaders during the Congress of Vienna in 1814 and it still is one of the highly regarded cheeses, although most of them are nowadays cheap industrial fare. There’s not many farm-made varieties left nowadays, with Brie de Meaux being the top dog, I want to introduce you to a less known, yet fabulous product called

I admit that I love this one, it’s stronger and saltier than its brother from Meaux, a great character, almost fluid when well matured and always soft and satisfying. The rind is white but it shows brownish, reddish traces, always a sign of more robust pleasures. But don’t get me wrong: Brie de Melun is not a somewhat rural, coarse thing. It just combines power with elegance, force with attitude which makes it, even in the brilliant galaxy of French cheeses, quite unique.

For quite a while, its existence came under threat. There was only one producer left and sales figures weren’t good. Today, there’s two farm-house producers, that’s much better than one, and they’re able to sell around 200 tons of cheese to the markets. They even found ways to export their fare to Canada, for instance, so there’s a good chance that Brie de Melun’s history has not yet come to an end.

The pieces weigh 1.5 to 1.8 kilograms, they are disc-shaped, 24 cm wide and 4 cm thick. That makes it thicker than the Brie de Meaux and leads to a longer time of maturation, 4 weeks minimum, usually 7 to 10 weeks. Needless to say that Brie de Melun is made of raw milk, cow’s milk, and that all procedures necessary are done by hand. This rare cheese has obtained an AOC label in 1980. And if you sneak in the video attached, you’ll find that there’s even knights attached to defend it…

As a companion, I prefer – against my habit to have white wines with cheese – a good balanced red wine from Burgundy, a Ladoix, maybe, a lighter Savigny-les Beaunes or a classic Aloxe-Corton.