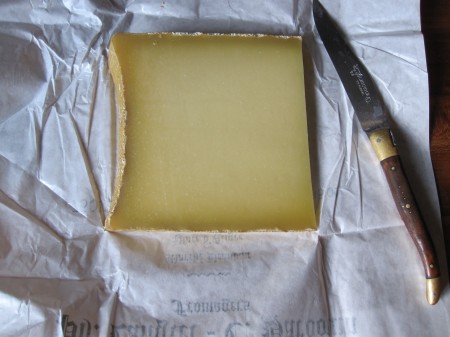 Say Beaufort and think about what’s in a name: beau means handsome in French, fort means strong. The combination of both describes the mountaineous region of the same name very well – it’s a picturesque landscape close to Mont Blanc, Europe’s highest peak, and it’s close to perfection when it comes to a cheese like

They call it “Prince of the Alps” or, with Brillat-Savarin, the prince des gruyères and they’re right: the Beaufort – and especially the Beaufort d’alpage which makes only 6 percent of the 4000 or so tons produced every year – is a rare, aristocratic cheese. It’s one of the biggest mountain cheeses produced, its origins date back to the 17th century (at least), and to me it’s one of the greatest cheeses all around. Once ready-to-eat and mature (after at least 5 months of ripening, one year is better), a loaf weighs 50 to 70 kilograms and can measure almost one meter over.

The Beaufort d’alpage is produced only during summer, during a hundred days high up in the mountains where no paths are paved. By the end of summer, the cows – they have to belong to locally raised breeds – pasture at over 2000 metres above sea level, milked by tough farmers who spend day and night with their herd. They’re changing places every day, climbing up higher and higher, it’s quite a show and its quite dangerous for men and beasts. Only the cheese maker returns to the châlet, the work shop somewhere at the tree line, crafting the loafs, two per day, one with the morning milk, one with the evening catch. 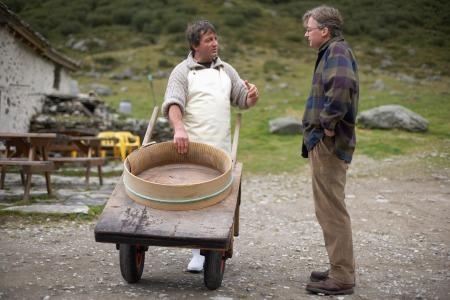 French Food Fool on the alp: the main guy is Claude Glise, left.

It’s a brutally demanding way of earning money, I’ve witnessed it once near the village of Beaufort in the valley beneath the Gebroulaz glacier where I accompanied cheesemaker Claude Glise for a while (if you’re reading German, here’s my SPIEGEL article in pdf containing great pictures of my colleague Maurice Weiss). When I saw Glise bowing over his keg full of thickened milk for the first time, drawing out the rough, grainy cheese with a linnen towel, I had the feeling of attending a religious service. It was a moment so powerful that I won’t forget it.

In the region and elsewhere in France this majestic cheese is often cooked or heated or used for gratins. I recommend eating it just like this, pure, raw, with a piece of bread and a glass of good wine (preferably a rich white, I’d say). Check the official website which is, as you might expect, pretty terrible. And whenever you have the chance to buy a bite of real Beaufort – go get it!