…while dreaming of summer beaches along the Mediterranean coast. You’re not the football type? And you haven’t heard about Mexico’s 2-0 win against les bleus yesterday night? Never mind, you’ve just missed the ongoing vuvuzela concert down in South Africa and some nice moves by the Mexicans. The French players were in fact going down from the first minute maybe due to a feeling of homesickness: I mean, now they will return to lovely France much sooner than expected! They will be back here next week already! And if they’re lucky, like I was today, they’ll stumble on this ad in the metro station Grands Boulevards in Paris and will get an idea how to deal with their humiliation and pathetic performance. 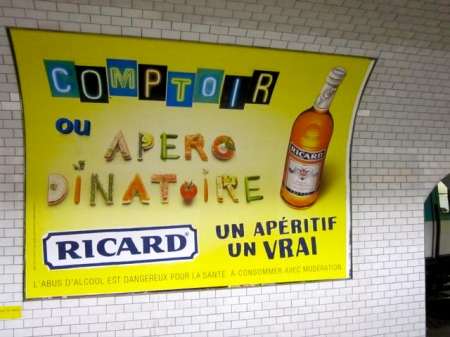 The French may lose, the French will drink: Pastis ad in Paris.

When it comes to Pastis though, the strong liquor made of anise and herbs and sugar, I’m addicted to a rarer brand than Ricard (who invented the whole business way back in the 1930s). In Provence I was served a glass of Henri

Bardouin Pastis once that sort of marked me. Ever since I sipped it, Ricard, Pernod & Co. can’t really impress me anymore. The Bardouin is smoother, more elegant, highly refined and perfectly herbed, it makes a very sound drink overall, and when you have yours on a terrace tucked into the steep small alleys of a medevial town somewhere in the Luberon mountains you can hear the angels sing.

I admit that you expose yourself as the more snobbish type at the same time. Real French people drink the Pastis 51 which is the worker’s and the farmer’s choice, their everyday apéro. The more bourgeois traditionalists go for their Ricard, and I actually have no idea who’s drinking Pernod nowadays. Bardouin is for the more sensitive drinkers, definitely, for people like you and me.