…with the big white fleshy spears now hitting the markets everywhere in Europe. There have been some earlier, shipped in from afar but now the home-grown species are for sale and I can feel the excitement, especially in Germany.

I know many people over there who regularly start a full-blown asparagus diet once the season has begun. They have asparagus for lunch and dinner over weeks, no kidding, they serve it as soup, as salad, elegantly accompanied by a slice of veal fillet or just by a chunk of cooked ham (or cured, up in the North), they serve it with potatoes and most of the time it comes cooked à l’anglaise which simply means: in boiling water (the Germans add sugar and salt and some butter to the water). The French, as always, do things differently.

They are not too keen on white asparagus, to tell the truth, they prefer its green brothers and I assume that this has to do with a certain laziness: I mean, it’s no fun to peel two pounds of the fragile spears… Concerning cooking methods, the French wouldn’t cook the asparagus in water either, they’ve found better ways to treat it, I’d say, like steaming or pan-frying it. This last method is my preferred one: You split a bunch of green asparagus lengthwise, fry it in a pan with some olive or other oil until browning, add some sea salt and a pinch of sugar  – and you’ll have simple yet great dish!

Here’s what I brought home from the market today (what you don’t see is a great piece of pork shoulder that will be turned in a magnificent roast with a crust): 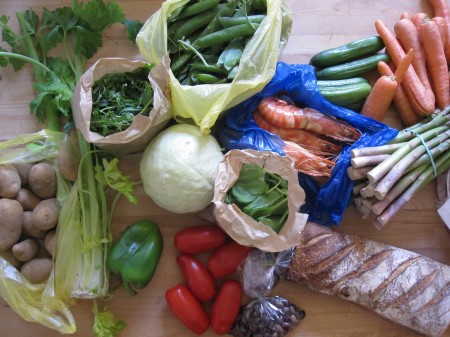 Olives from Nice, peas and shrimps and stuff: many options lying ahead.