…if you asked me, or how would you call a retail offer where you supposedly get high quality food at the price of junk? Look at the picture below and feel invited to be surprised. I’ve taken it today in the Paris metro station Grands Boulevards, it’s a new ad campaign of the French multinational supermarket chain featuring Saumon fumé de Norvège, that is: Smoked salmon from Norway, 200 grams sold for 2,69 Euros (3,62 US$). That is, forgive me, impossible. 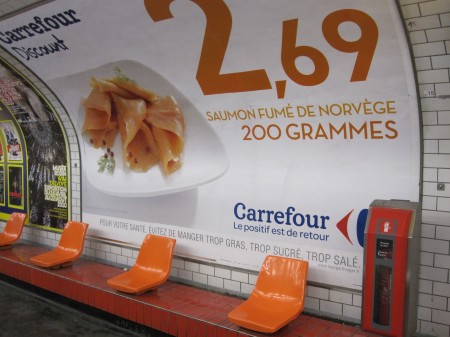 Prices from Neverland: Carrefour ad in the Paris metro.

Let’s play naive and ask some questions. This ad campaign, isn’t it quite costly? The packaging of the salmon, what does it cost Carrefour? The transport might be quite quite expensive (I mean, it’s coming from Norway, in times of a vulcanian cloud hovering over our heads…). The producers want to make a living, too, the stuff has to be distributed all over France, maybe Europe, and then there’s profits to be made. So what’s the fish in the package worth? Can be only cents, actually.

Now we’re not that foolish, are we? We’re aware of the fact that huge enterprises like Carrefour can afford some special offers every now and then. They’re big players, don’t forget, so they can dictate production prices, and they can shift their 1001 products around, while pricing policy is a science in itself, I’m sure. But whatever the calculations are, this one is wrong. In times, when the world is discussing shrinking fish stocks and sustainable development, it’s a clear sign of disrespect and backward thinking to sell out salmon like this, isn’t it? I would have thought that the Carrefour people were smarter in the meantime…but that was naive.