Our beloved French capital is so incredibly self-centered that foreign cuisines above the fast food level have a hard time here. Chinese food makes no exception. Yes, you can find them all: the Lotus Gardens, the Red Dragons, the Emperor Mings and the Eight Jewels but they all serve the fried-then-drowned-in-soy-sauce-menu which unfortunately is so commonplace all over Europe. In Paris, believe me, it’s even worse. Here, the “Chinese” restaurants often go down the Pan-Asian alley, listing Chinese AND Vietnamese AND Thai AND Japanese platters on their menus, while the guy in the kitchen is in fact a Cambodian with Indian accomplices. So my recommendation to you all is to steer well clear of these highly dubious etablissements. 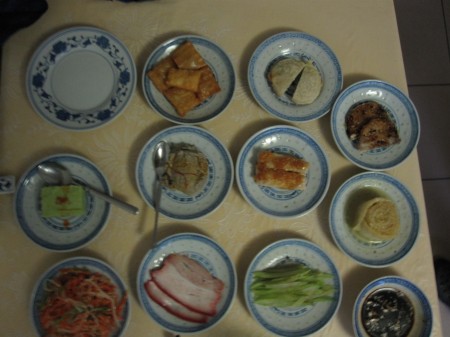 8000 miles away from Paris: decent Chinese food (in Beijing).

In the picture above you can see how it works: These were only the starters of an 11-course-menu I had in the Hutong area of Beijing last year. In the lovely, chaotic Family Li Imperial Cuisine restaurant the dishes came rolling in for hours and hours and I really got that grand Emperor feeling in the end. Well, don’t look for sensations alike in Paris.

The more ambitious Chinese chefs here normally go for Peking Duck and lead their guests to believe, that this was the essence of Chinese cuisine (it’s not). Restaurant Tang in the 16th arrondissement is such a place, same with Chez Vong in the 1st, near Centre Pompidou. The chefs are both excellent cooks, don’t get me wrong, but they water down the authentic recipes assuming that Europeans weren’t able to stand a real Chinese taste explosion. But that is, in the year 2010, a ridiculous assumption. I want real Chinese food! I want it now! And if you had a good address in Paris – please! please! tell me! please!